A Special Prophetic Word For You!!! 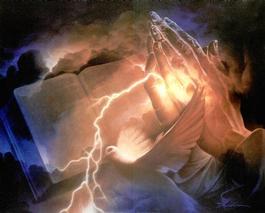 Worshiping the Lord and ministering unto Him
His word came into my spirit and bubbles in prophecy
And this is what the Lord would now say unto you:

Satan, Get Out of My Garden!

28 And God blessed them, and God said unto them, Be fruitful, and multiply, and replenish the earth, and subdue it: and have dominion over the fish of the sea, and over the fowl of the air, and over every living thing that moveth upon the earth.

When God created the humankind in the beginning of creation, He created them in both the male and female form and named them the humankind. Now, God spoke the blessing over them and those blessings were not optional, they were compulsory. He commanded them to be fruitful, to multiply, to replenish the earth, to have dominion and to subdue it. The blessings that God pronounced over them was very important to their destiny, it was a series of prophetic blessings and commandments.

The last two words of the blessings however revealed something that was very remarkable to their destiny. God told them to subdue the earth and have dominion over the swimming fish, the flying birds and every living thing that moves upon the earth. Now, if you take a look at those two words (“dominion” and “subdue”) in the original text of the Hebrew language in which it was said, you will be amazed how it suggests that there was an enemy that would want to take the earth from them who must be subdued or conquered. The word translated as “subdue” in the original text also means to conquer or bring into subjection by force. God blessed the humankind with the ability to conquer the earth and bring the earth and the devil into subjection. If there would be no enemy, then there wouldn’t be anyone to be conquered or forcefully bring into subjection, isn’t it?

The Hebrew word that was rendered as “have dominion” in that passage also suggest the same thing; it means to tread down, or subjugate. It also means to prevail against, reign over or take control of.  So, the humankind was to do all that on the earth. God saw that the enemy was coming in his tricks in attempts to take the earth from the humankind and He blessed the humankind with the ability to defeat him and subdue or keep him underfoot forever… READ MORE HERE